In March 2014 I was offered the privilege to help Solar Roots install a solar electric system in Myanmar. Solar roots is an American non-profit NGO offering free renewable energy hardware and expertise to the people of Myanmar http://www.solarroots.org/. It was founded and run by a retired electrician from California named Bruce Gardiner.
On March 18th I flew from Bangkok to Mandalay and met Bruce at the bus station where he informed me we were about to jump on a 14hr bus ride. Our destination was an orphanage called 'Emanuel Children's Home' which is situated in a town called Kalay, very close to the Indian boarder.
The road was worse than most farm tracks from NZ. Steep dirt hills riddled with potholes and cutbacks. This area is completely cut-off from the major centers during wet season because the goat track we travelled on becomes inpassable. We couldn't really sleep on the bus (which was crammed to the brim with people and luggage) so Bruce told me a lot about Myanmar's checkered past.
We arrived in Kalay at 3am, but our pickup wasn't till 6am. We killed a few hours in a tea house with the bus staff. Communication was limited but we managed to share a few details about where we were from and what we were doing. After a while the driver retired to his bus for some shuteye, but not before paying for our tea and breakfast. A very generous gesture from one who was obviously not a wealthy man.
Pastor Joel (the foundered and overseerer of the orphanage) picked us up and drove us to the site. On the way I was amazed at how many houses had solar panels in their roof. Nearly every second building was equipt with a solar system and many of the shops had panels out the front for sale. We later learned that the government does not provide electricity to this area, so the people fend for themselves.
We arrived to many curious faces at the orphanage. The crew consisted of 13 orphans, Joel's family, Grandad, Grandma, Great Grandma and a hord of curious neighbours all eager to see what the white people were up to. Everyone was very shy and respectful towards us.
Here's a selfie of Bruce and I with a few of the kids. 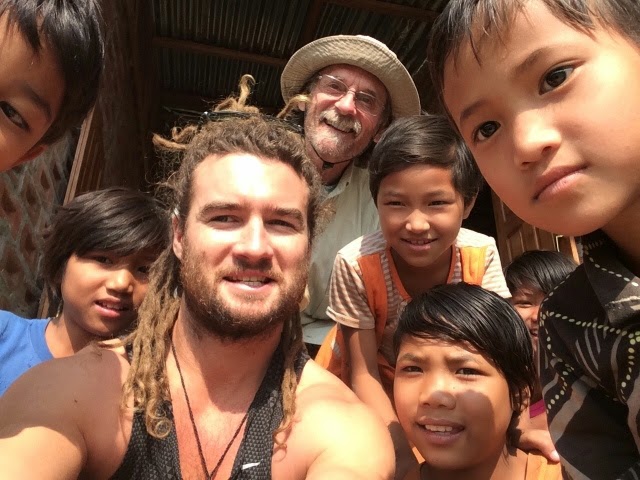 We did a quick site evaluation, wrote a shopping list and jumped on the scooters to go and buy our solar hardware. Joel took us to a shop we called 'Solar Heaven'. The place was completely stocked with every sort of solar component one could wish for and all at a very good price! We were amazed that in such a remote place we could find every piece of hardware we desired. After an hour of shopping we filled a TukTuk with all sorts of solar goodies, paid the shop assistant who was helping us (a young beautiful Burmese woman) and headed back to the orphanage where we were greeted by a lot of smiling, thankful faces.
This is Grandma thanking Bruce for all the equipment we bought. 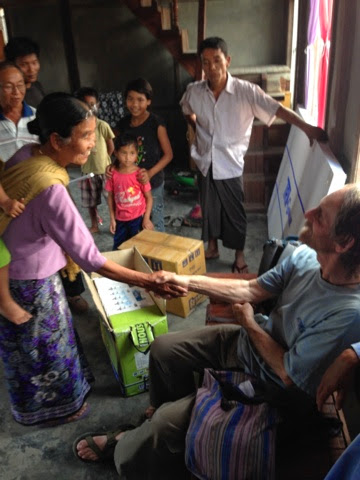 We spent the following week installing the system. Usually this would be a lot quicker but because there was no existing electrical infrastructure in the house we had to completely wire the entire building.  This was a great learning experience for me as I had never done any such electrical work before. Here's a few pics from the build.
Myself, Joel and the builder taking measurements for the panel frame. 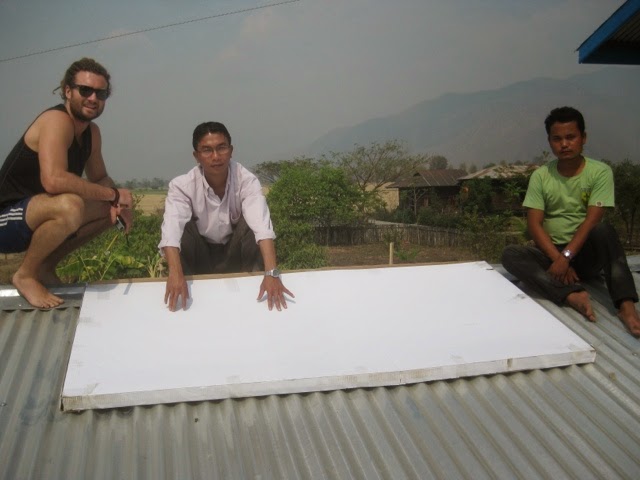 Grandad and the boys painting the frame. 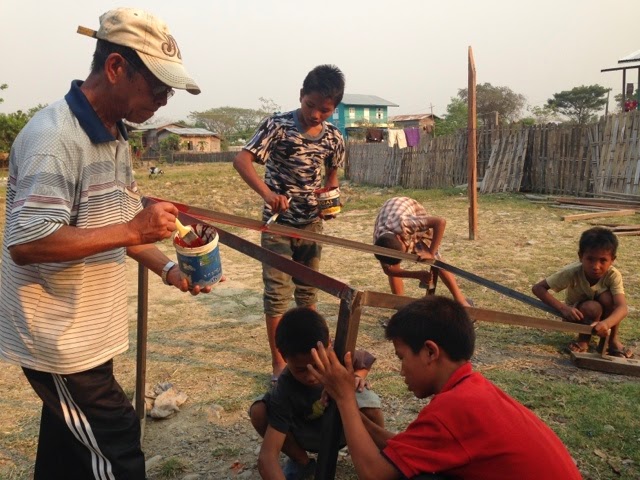 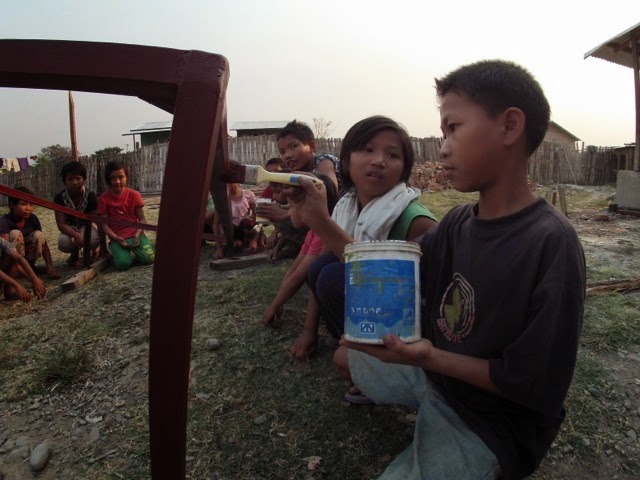 The proud lads with their new frame. 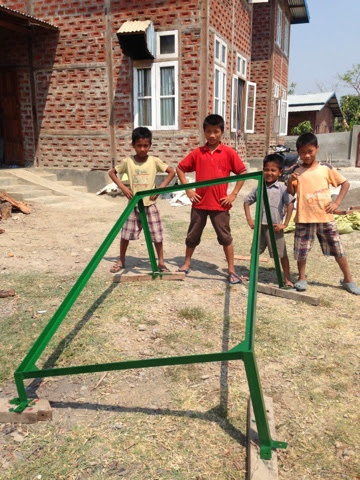 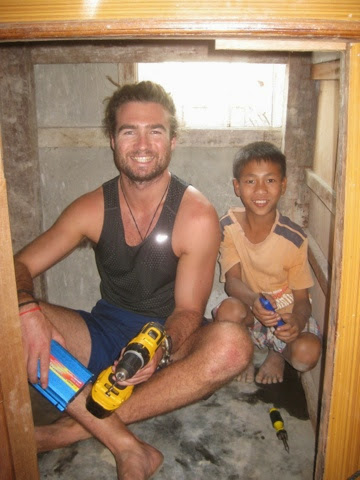 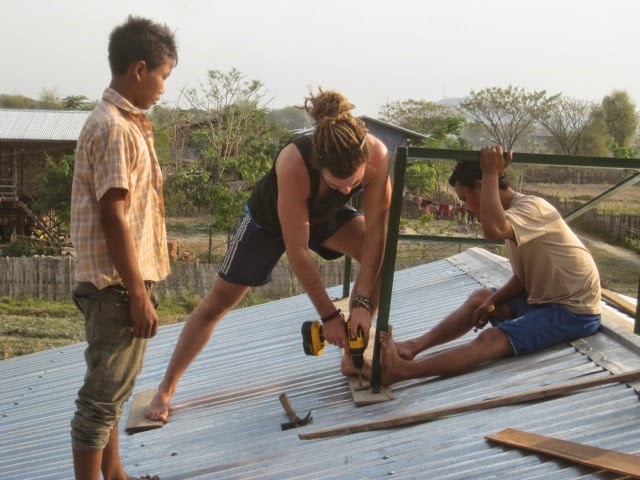 Fixed in place and ready for testing. 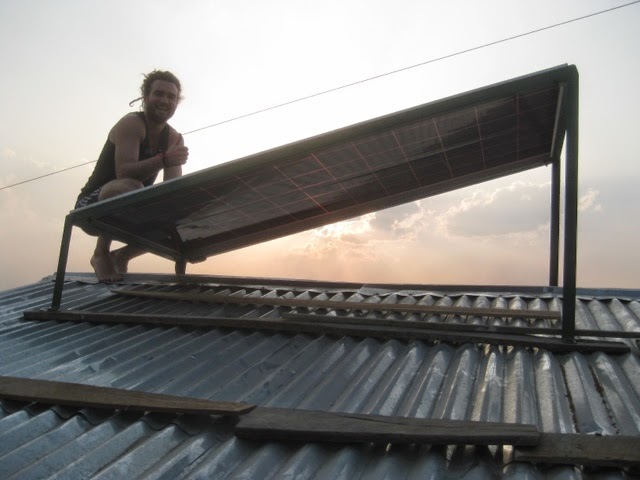 Bruce taught me how to wire a house. I learnt a lot of very useful things from Bruce during my stay. He has been working in the solar industry for the last 3 decades and has a wealth of knowledge. 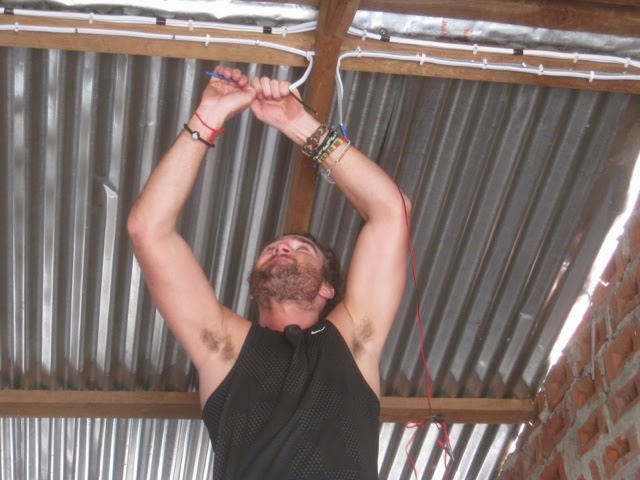 There was no shortage of helpers. The kids would rush to be the first one to hand me the pliers or fetch some more wire. 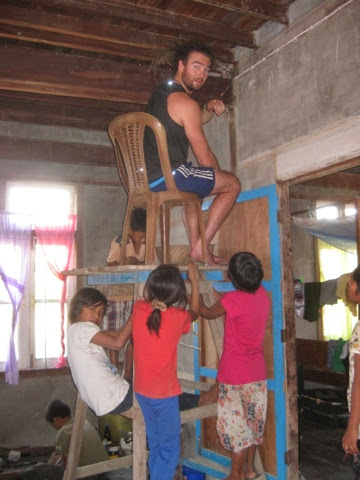 This is the upstairs classroom before the solar system. They had one small light that was run off the neighbours generator which only ran from 6pm-8pm. They also had to pay a monthly fee. 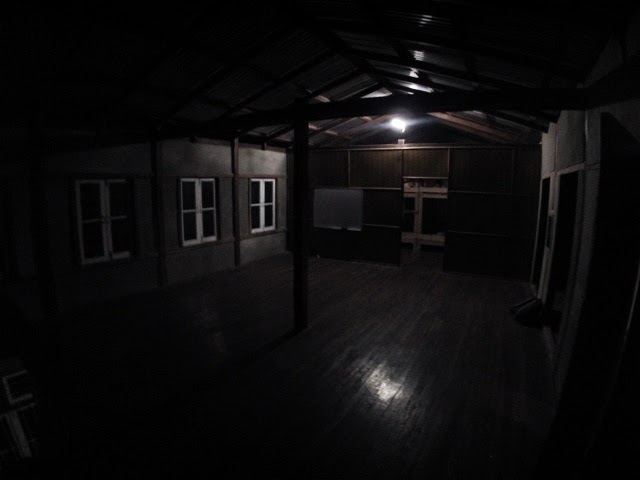 This is what it looked like after. Unlimited free green lighting! 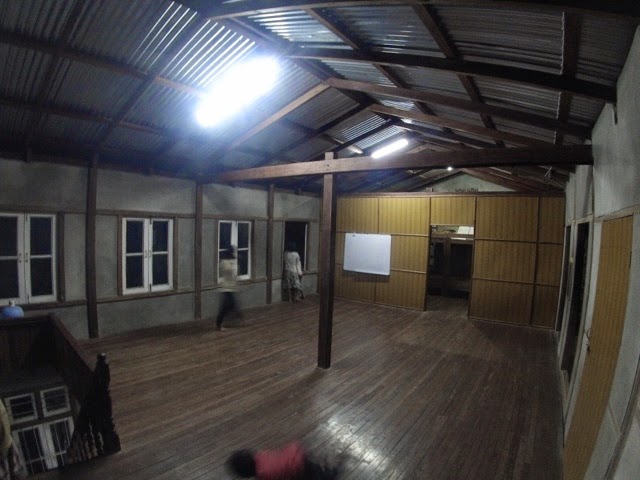 This is the living room before we installed the solar system. 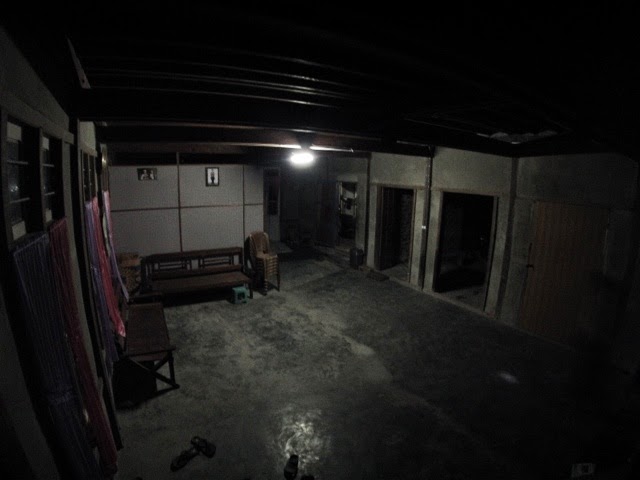 And this is after. 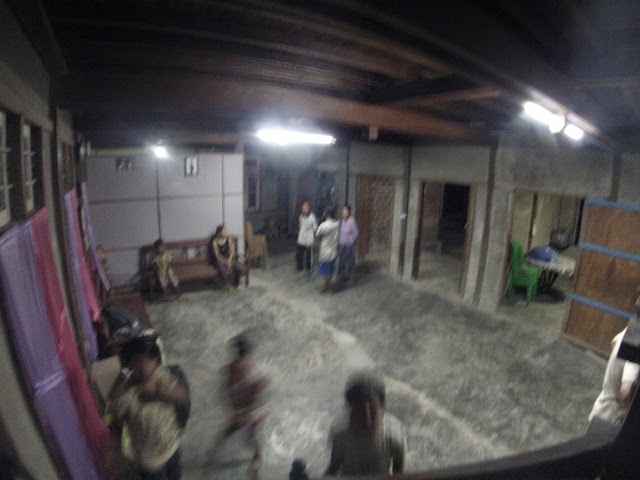 This little dude is pretty stoaked he doesn't have to wash the dishes in the dark any more. 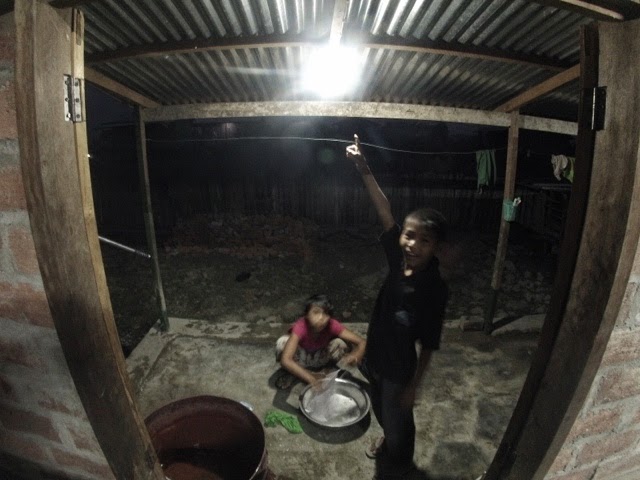 This is the security light we installed outside their front door. It stays on all night to ward off strangers and animals. 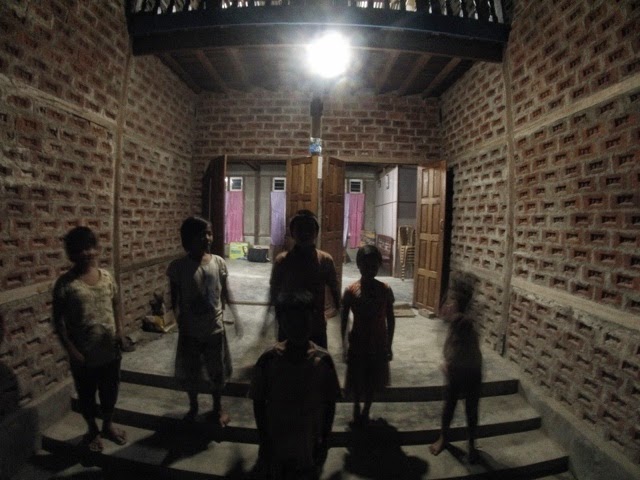 The crew with their new lights. 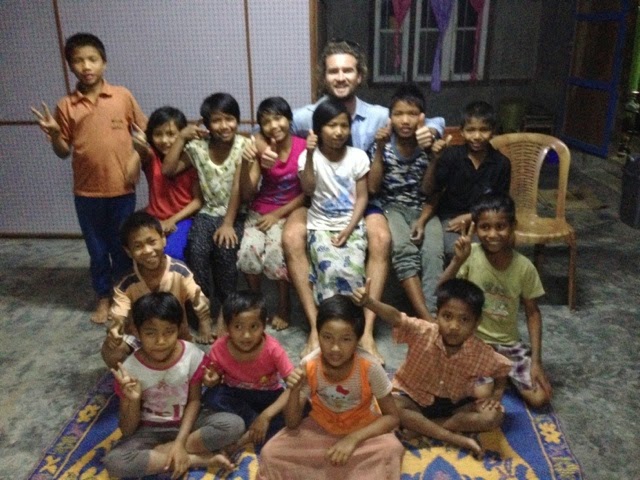 Asleep is Pastor Joel's son, Caleb. The orphans (aged 5-11) took turns looking after him. These girls are going to break some hearts when they grow up! 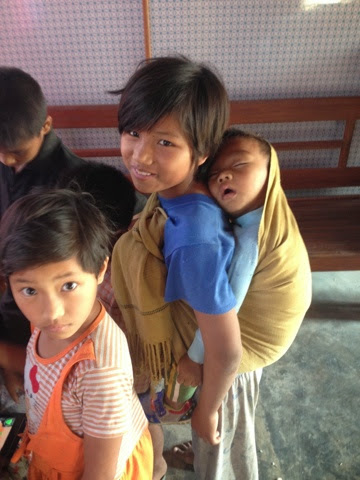 Me and the crew. They were such great kids. Very friendly and always so eager to help. 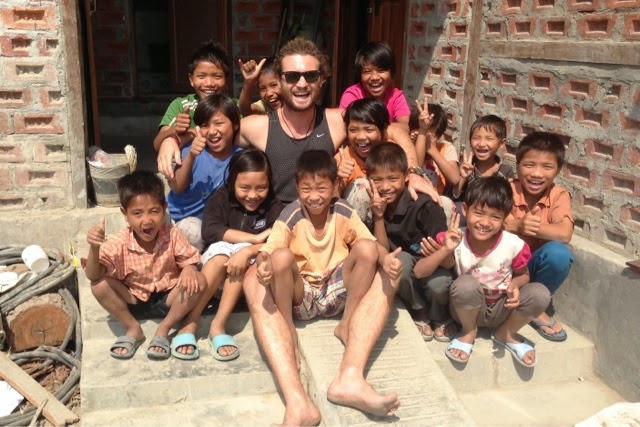 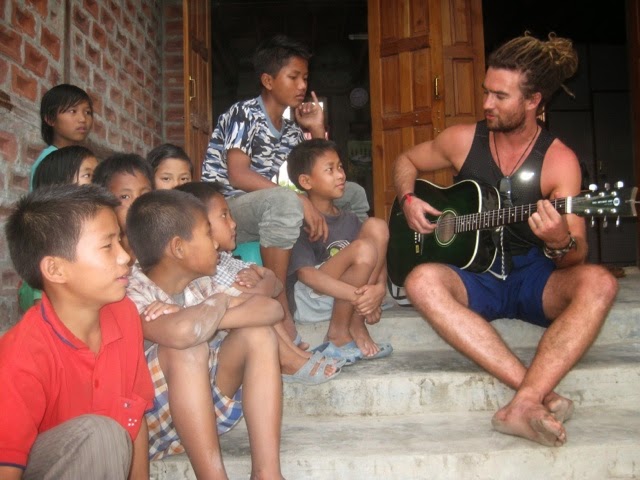 It was very humbling to live/eat/work with these people, especially the orphans. They sleep on the floor, their diet is nearly solely rice and they have no possessions (toys, photos etc) but they were always so happy. They would follow me around all day handing me tools and fetching bits and pieces. I would strip the plastic insulation off the wire and drop it on the ground. The kids would scurry in and collect the pieces of plastic, competing as to who had the longest and the most pieces. They didn't speak any English but would repeat everything I said. By the end they were all walking around looking at the system saying "Veddy gud!"
Before leaving I bought them a volleyball net and ball, a football and some other toys. The toys cost me about $5NZD but the look on their faces was priceless! Since leaving I've sent money to Pastor Joel. I asked him to use the money to make the kids happy. He is a very honest Christian man and lived up to his word. He sent me a detailed receipt of what he spent the money on and photos of the kids eating ice cream in new clothes.
If anyone would like to donate please email me (hamish.richard@gmail.com) and I can put you in contact with Pastor Joel. It's a good place to donate because 100% of your money will go towards helping these people, whereas corporate charities take a large cut of your donation to cover their overheads. These are lovely, honest, thankful people and I know any help you can give will be most appreciatd.
This was an amazing and humbling experience for me. I feel very thankful that I was given the opportunity and must extend immense gratitude to Bruce for the invitation to come and help him. The Myanmar people are some of the most loving, respectful, kind people I have ever had the privilege of meeting. I would strongly recommend travelling there and helping. By giving a little, I learnt a lot. I can't wait to go back!
Posted by Hamish at 19:44